Copywriting: The Goose that Laid a Golden Egg

When I was 18 years old, I joined Amway.

I called close to 100 different people in my warm market, and I even hunted down unsuspecting “prospects” in public places like Barnes & Noble.

During that time of my life (from age 18 to 21), I listened to scores of motivational tapes. One of them, more than any of the others, left its mark on my thinking.

It was a tape by Burt Gullick, who at the time was a Diamond in the Amway business. On the tape, Burt described Amway as “the goose that laid the golden egg.” He then proceeded to explain this metaphor. 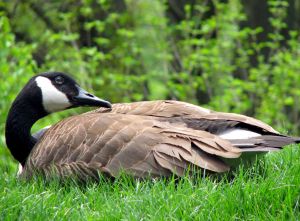 Is Copywriting Your Goose?

Basically, Amway had provided Burt with a means of achieving his freedom. It provided him with a level of wealth and time independence he hadn’t been able to find anywhere else.

After achieving success in Amway, Burt used his income to invest in other opportunities. One of them I remember vividly because it was so unusual.

What did Burt invest in?

Yep, Burt used his Amway money to buy trash dumps. The model (as I remember it) went like this:

As you can imagine, this story really stuck with me. Here was a guy who had achieved success in Amway, but then reinvested his money in other opportunities.

But the other key point was that Burt needed “the goose” to get to a point where he had other opportunities to invest in.

As I’ve reflected on this story, I’ve decided that for me, copywriting is “the goose that laid the golden egg.”

Rather, I say this because copywriting has given me a greater income than I could have found in a job; more time flexibility than almost any other self-employed profession; and more opportunities than I know what to do with.

I have achieved a measure of success within the field of freelance copywriting. But more importantly, this success has positioned me for even greater success in the future.

Obviously, a career as a freelance copywriter isn’t for everybody. Neither is a career in Amway.

But ask yourself, “What is my goose? Where will my golden egg come from?”

There are many different “gooses” that can lay golden eggs. The trick is to find one that fits your skills, preferences, and personality. Once you find it, stick with it â€” and really put forth your best effort.

Because, if you do, your “goose” could easily become a stepping stone into bigger and better things for you in the future.

P.S. Think freelance copywriting might be for you? Then you’ll want to watch the free training videos posted here.

P.P.S. Questions about running a freelance copywriting business are continuing to come in daily. If you’ve asked a question, John and I will do our best to respond as quickly as possible. Thanks.

P.P.P.S. Video #4 is going to be released tomorrow, July 1. In this video, I reveal some methods and strategies for commanding copywriting fees you can be proud of. If you’re on the notification list, you’ll be automatically emailed when the video is posted.

If This Terrible Ad Sold 2 Cans of Paint, I Would Be Shocked