Why You Should Never Claim You’re the Best

You should never claim you’re the best in your ads.

Reason #1: It’s difficult, if not impossible, to prove anything is “the best.”

Reason #2: Even if you could “prove” it, most people would still be skeptical.

Reason #4: It does nothing to further the sale and, in fact, may hurt sales.

Regardless of how many reasons there are to never claim you or your products are “the best,” it doesn’t stop clueless entrepreneurs and business people from doing so. 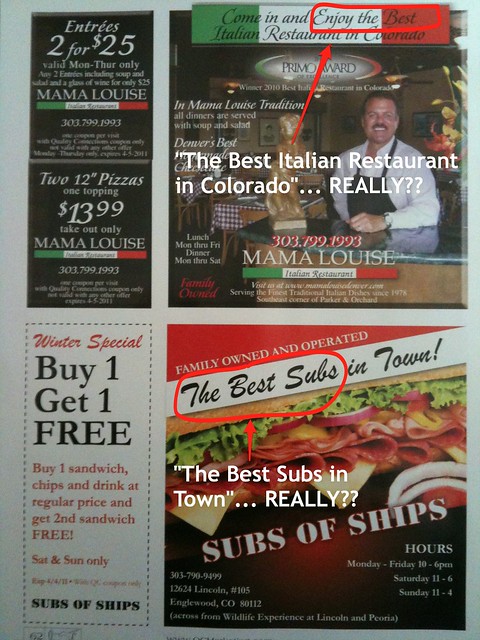 “The Best Italian Restaurant in Colorado”

The first ad claims Mama Louise is “The Best Italian Restaurant in Colorado.” As if that were not enough, the ad then claims that Mama Louise also has “Denver’s Best Homemade Cheesecake.”

At least the first claim cites an award — specifically, the “Primo Award of Excellence.” Unfortunately, I’ve never heard of Primo before.

The second claim raises even more skepticism because no proof is offered.

Bottom line: This ad does not persuade me to try Mama Louise.

“The Best Subs in Town!”

The only thing worse than one ad claiming to be “the best” is a second ad on the same page making the same claim.

Subs of Ships claims they have “The Best Subs in Town!”

Could Subs of Ships really make subs so good they’re better than all these other sub-making restaurants?

Especially since not a single shred of proof is offered to support the claim.

And just like that, I’m gone — very much like all the other people who saw this ad and flipped the page.

The Best Way to Say “I’m a Clueless Advertiser”

There’s really no better way to say “I’m a clueless advertiser who can’t think of anything better to say” than to claim you’re “the best.”

So unless you really enjoy looking like an advertising neophyte… and sitting by a phone that never rings… I’d strongly recommend you avoid playing “the best” card.

How to Get Inside Your Prospect’s Head

How Great Sales Copy Can Fuel the Growth of Business