This Subaru Ad Is So Horrific It Gave Me Goosebumps

The ad writers at Subaru must think they are quite funny.

They probably spent hours batting around clever headline ideas to sell cars, none of which actually had anything to do with selling cars.

Finally, they agreed on their approach and paid thousands to put a full-page ad in Inc. magazine.

Unfortunately, the ad writers’ attempt at humor is so deficient I’m not even sure what to say about it.

Did they talk about speed, fuel efficiency, safety, interior space? No, none of these things.

They talked about goosebumps…

Here’s the ad. See for yourself. 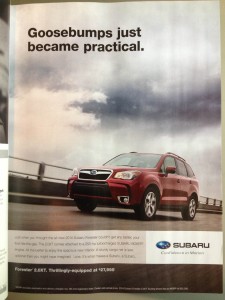 What the hell does that even mean?

Are goosebumps going to help me drive the Subaru Forester better than I would without them?

Is the Forester so fast that I’ll need to increase the drag coefficient by putting my goosebumped arms out the windows?

The goosebumps headline is never explained, and the rest of the ad is nearly as bad…

Just when you thought the all-new 2014 Subaru Forester couldn’t get any better, your foot hits the gas. The 2.0XT comes attached to a 250-hp turbocharged SUBARU BOXER engine. All the better to enjoy the spacious new interior. A sturdy cargo net is less optional than you might have imagined. Love. It’s what makes a Subaru, a Subaru.

The first sentence of the body copy makes a big blunder because I’m not thinking about the Forester at all, much less how the 2014 model could be better.

I’ve got better things to do. I’m thinking about deadlines, bills, opportunities, and a million other things. The Subaru Forester is not one of them.

And can the phrase “spacious new interior” be any more generic? It could apply to any car on the market. You’d think the ad writers would include some specifics… like how much interior space the car has and how it compares to similar models.

But, no. The ad writers prefer to showcase their cleverness rather than useful details that might help sell the car.

Anyway, this ad is a miserable failure.

No call to action, not even to visit a dealership or schedule a test-drive.

As I was thinking about writing this blog post, I received Bob Bly’s daily email. Inside I found this quote by Maxwell Sackheim, which sums up perfectly the lesson that Subaru’s ad writers desperately need to learn.

“Clever plays on words and attempts to be funny in advertising usually fall flat. There is a place for cleverness and humor, but it is a rare product that can win more customers through these devices.”

And sometimes attempts to be funny don’t just fall flat — they confuse and put off prospects, too.

P.S. Want your ad to actually sell your product? Consider hiring me to write your ad for you.

If This Terrible Ad Sold 2 Cans of Paint, I Would Be Shocked